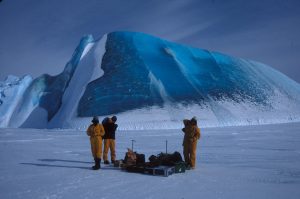 Description: Seawater freezes to the base of the Amery Ice Shelf in East Antarctica, forming clear “marine ice”. The marine ice becomes exposed to view when an iceberg capsizes. The color of marine ice varies from blue to green, indicating the content of iron oxides, which are then delivered to the Southern Ocean when the iceberg melts, providing the limiting nutrient for phytoplankton. People in the picture: Collin Roesler (former UW Oceanography student), Darren Turner (student at University of Tasmania), Petra Heil (Australian Antarctic Division). 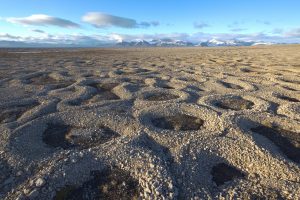 Description: This polygonal patterned ground is found near NyAlesund, Svalbard in permafrost. These remarkable features self-organize as the silt-rich soils heave out the stones that then move to the outside of the circle. A convection-like motion occurs within each circle. It is the presence of polygonal patterned ground seen on Mars was one of the first hints that Mars contained water in the form of ice-rich permafrost. 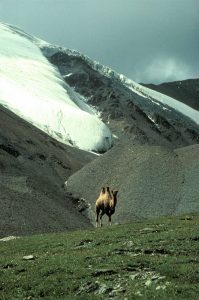 Description: A chance encounter with an overly aggressive (affectionate?) Bactrian camel on a late-glacial terminal moraine below an outlet tongue at the north end of the Sutai Uul glacier, Altai Mountains, western Mongolia. July 24, 1998.